Last week we reported that lenders had started to increase their mortgage rates, and this week we've got further confirmation that the end of record low mortgage rates could be upon us, with data from the latest Moneyfacts UK Mortgage Trends Treasury Report showing that, as SWAP rates have seen a steep rise due to base rate speculation, the average two-year fixed mortgage rate is also starting to edge up.

The figures from the report, due to be published later this week, show that the average two-year fixed mortgage rate has fallen by 0.02% from September to stand at 2.20% this month, another record low. However, this month-on-month fall doesn't quite tell the whole story, as additional figures show that the average has now increased by 0.04% from 1 October, and there's no indication of a reversal.

The graph below goes some way to explaining the recent uptick, and it's all down to SWAP rates. The SWAP rate is the interest rate charged between banks for lending to each other, with this wholesale cost often having an impact on the mortgage rates charged to borrowers. As you can see, SWAP rates have jumped up in recent weeks, and this is starting to filter through into mortgage rates. 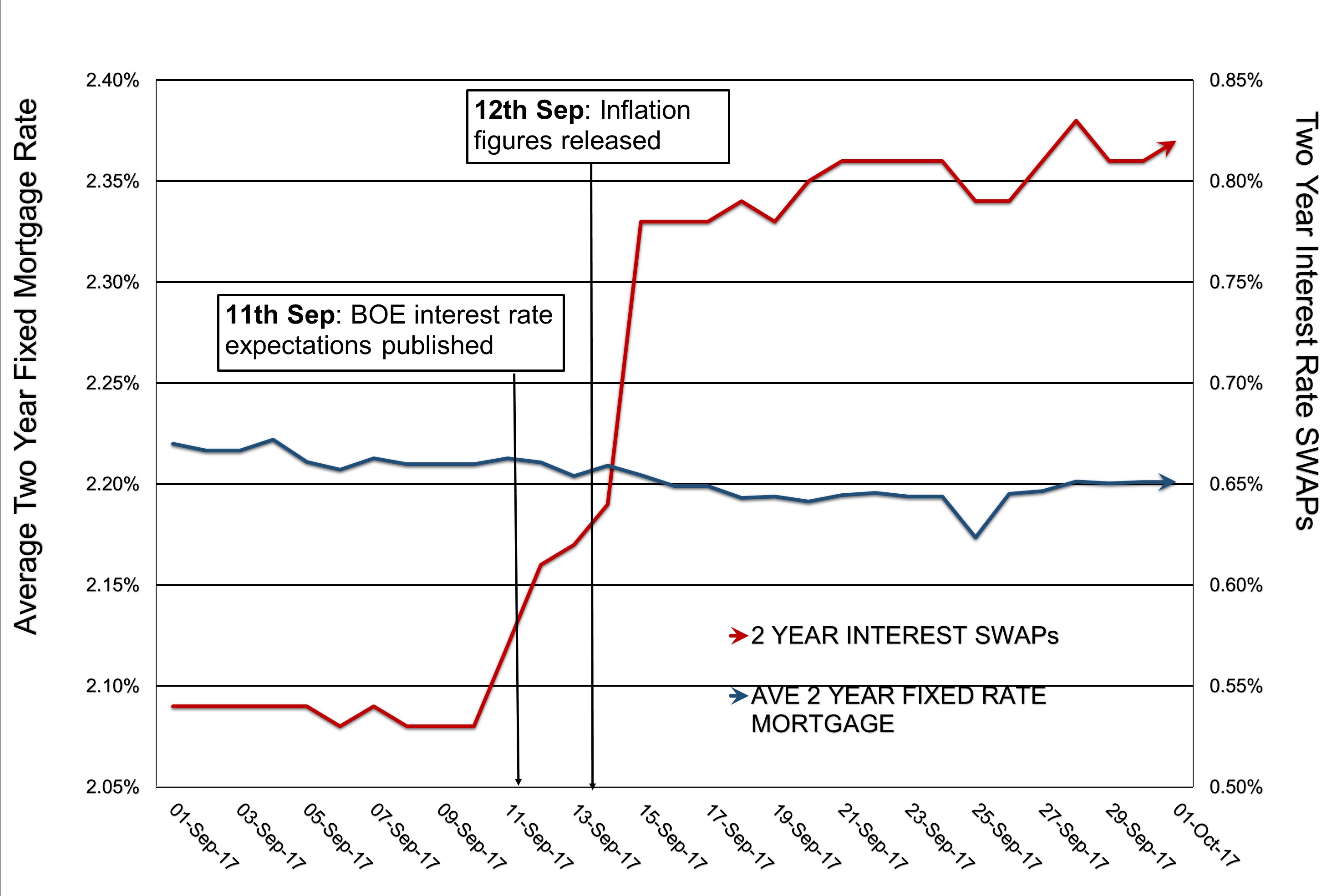 "The higher inflation figure announced on 12 September, coupled with the Bank of England stepping up its interest rate warnings, gave a clear indication to markets that a base rate rise is likely in the near future," explained Charlotte Nelson, finance expert at Moneyfacts. "This acted as a catalyst for SWAP rates to rise, with the two-year SWAP rate increasing from 0.54% to 0.82% in just one month.

"In the past few years, the link between mortgage rates and SWAP rates appeared to be broken, not only due to the volatility of the rates but also the fierce competition among lenders in the mortgage market. However, the substantial increase in SWAP rate seen in the past few weeks has quickly changed this, with 21 providers upping their rates since 12 September."

Essentially, providers are now starting to factor SWAP rate rises – and therefore a potential base rate rise – into their pricing, which is causing the average two-year mortgage rate to creep up. This new trend is showing no sign of abating; with rates having sat at record lows for so long, it's difficult for providers to absorb the increased cost, with the only option being to up their own mortgage rates.

"As a result, lenders are now treading a fine line between needing to remain competitive to protect their mortgage book and absorbing the cost of higher SWAP rates," continued Charlotte, which means further rate rises could be on the cards

"This has also given the mortgage market the strongest indication for some time that a base rate rise is likely, which means it is crunch time for borrowers looking to remortgage; it is vital they act fast to ensure they get the best possible deal before their increase."

Mortgage rates are on the rise – which means now's the time to take action! If you've been toying with the idea of remortgaging for a while, you don't want to wait much longer, otherwise you could find that the cheapest mortgage rates are increasingly difficult to come by. Check out the best mortgage and remortgage deals to get started, or use our mortgage calculator for a more personalised overview of the options available.